← You’ll always have critics
When will I grow up? → 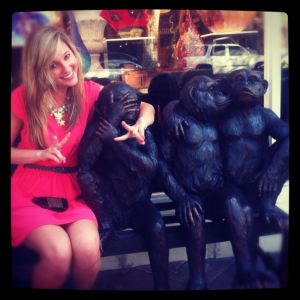 This post was written by Jen, a writer who has edited for a magazine and works in PR:

I’m Jen Glantz. I’m a writer, a finger-dancing guitar player and an obsessive pizza eater who since graduating from the University of Central Florida 2 years ago (with two diplomas collecting dust somewhere in a box) have postmarked myself in three different states and have had three different jobs: traveling the country working as an educational consultant for a national sorority, flipping pages as a magazine editor, and currently, dabbling with PR in a city driven by dreams in the backseat of taxi cabs.

This whole “real world thing” is quite the adventure. See, I’ve been a published writer for 13 years, spilling my words into magazines (ranging from style to scuba diving), newspapers, websites and even this one time, a speech, for someone who didn’t speak a word of English. So naturally when I graduated from college, I wanted to hone in on my passion and my experience and become a highly-acclaimed writer, but quickly realized that it would not be that easy.

My first job out of college was traveling the country working for my National sorority as an educational consultant. It was an amazing opportunity to get to speak to and inspire young women, while not through the power of the written word, through the spoken word. It helped me learn how to engage an audience and drive successful results on very little sleep, and a limited amount of free WiFi at local Starbucks.

After my year was up, I settled down doing what the high school version of myself would deem my “ultimate dream job”. I worked as a magazine editor and was able to pump out feature story content on the people, places and things that tickled my heart. It was a job I spent months trying to earn and it all started with a personal “fan” letter to the publisher, whom I had admired for years.

I wrote to her letting her know that I was a recent college grad, with not much more than whit and determination on my side, that found her writing to be uplifting and inspirational. Soon after, she asked to meet me face-to-face and through persistence and constant follow-ups, my opportunity grew from an internship with the magazine, to becoming an editor and a manager of social media.

This was not a job posted online, it was one I reached out and grabbed because I knew I had something to prove and something to bring to the table, which above all else in this rough economy, is key.

Within 6 months, I found myself day dreaming at my computer, desiring to work in some high rise building in a scary, overcrowded, germy city like New York. I began sending out my résumé to anyone with an inbox, who worked in a communications-like profession, and traded all my free time stalking friends on Facebook to picking up the phone and begging for someone at these jobs to give me 5 minutes of their time.

I landed a gig in PR, what many of my Journalism professors called “a writer’s way of selling their soul”. I hop-scotched my way to New York in January and have been navigating through a new professional and a hustle-bustle city ever since.

Through it all, through living in different cities and dancing through different jobs, I’ve kept up my love of writing and relating to people via my blog www.thethingsilearnedfrom.com, an honest and raw approach to giving readers a look into a 20-something’s life that does not always make sense, go a certain way, but that reveals in the acts of laughing and learning at mistakes and holding on to the nouns that keep us afloat, no matter where in the world they are postmarked.

I’m willing to bet that all that matters, at this age and at this time, is never giving up on our wild dreams, though many obstacles will try to tango with us on our way. You’ll see.

Jen Glantz is a 20-something crawling the streets of NYC. You can find her in a tutu and converse, surrounded by overdue library books, pizza crust and the spontaneous combustion of laughter that often shoots the chocolate milk right out of her nostrils. Jen is a proud graduate of the University of Central Florida, where she received her B.A. in both journalism and English. Read Jen’s latest work on her blog “The Things I Learned From,” keep in touch with her on Twitter, or network with her on LinkedIn.

← You’ll always have critics
When will I grow up? →