← My article for Under30Careers
20something profile: Isaac →

This post was written by Belinda, who was recently hired by an advertising agency:

My name is Belinda Meek; I am 24 years old from Sydney, Australia, and have just completed a Bachelor of Communication with an Advertising major at the University of Western Sydney. I have a real passion for television advertising and the process of buying and selling advertising space, and it is my dream to have a career in this field — but Advertising was not my first love.

When I was in high school, I loved science. For my Higher School Certificate I studied Physics, Biology, Chemistry, Sport Science and PD/H/PE, as well as Advanced English and Math. I had the dream of becoming a physics teacher and applied for numerous university courses that would allow me to pursue this dream.

The final year of high school flew by, and before I knew it, I had completed my last high school exam ever. When my results came back, I was very happy because I achieved a score well beyond what was required to be accepted into any of the university courses I applied for. There were still a few months until university offers were released once school finished, so I started looking for a job. I was hired by Target as a casual sales assistant.

In February of 2007, I received my first university offer. I was accepted into the University of Wollongong for a Bachelor of Secondary Science, where I was to major in Advanced Physics. By this stage I was unsure whether I wanted to continue along this path. I’d had a few months of free time, but I still didn’t feel ready to start full time study again and wasn’t really sure if I was cut out to be a teacher. I decided to defer my studies for a year, so I had some more time to decide.

I continued working at Target, becoming part time and working up to 35 hours per week. I loved the money I was making and became very comfortable in this setting. Once the year had gone by, and it was time to make the decision to either accept the university position or abandon it for good, I had long left my dreams of being a science teacher behind. All I wanted to do was work at Target and had started looking into management traineeships.

I worked at Target all through 2009 too, but midyear, things weren’t so peachy anymore. There had just been a big managerial change-up in my store, and the new managers did not know any of the old staff, so it felt like re-adjusting to a completely new job. On top of that, I became very sick with glandular fever halfway through the year, and I went from not taking a single day of sick leave in my life to using up every single hour of sick leave I had accumulated in the three and a half years all at once.

I started getting treated really badly by the new management, who seemed to think that I was pretending to be sick to get out of working. The new management started to threaten me with the loss of my job if I didn’t show up at work, so I worked through the sickness. I was so weak that one day when I was asked to climb a ladder, my legs couldn’t hold up my weight, and I collapsed, falling off the ladder and injuring myself. The managers still thought I was faking it, so they called my mother in and told her I was to stay home for 2 weeks, unpaid, and at the end of the two weeks, they would discuss my future with the company. 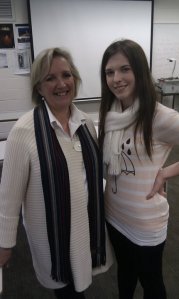 During my two weeks off I was so fed up with being treated so horribly. I hated being belittled. I decided at this point that I was better than that and too smart to be working part time for this kind of company. I started looking into university courses and became interested in Advertising. People always used to say to me that I should work in advertising, as I had a way of selling things to people, and I would always look at ads and wonder how much they cost the company. I often enjoyed watching the ads on television more than the actual program itself.

It’s true that I was very interested in advertising, but I didn’t really know much about it. Choosing a career isn’t all about ability but also interest, so I decided to apply to see if I’d get in – I found out in January 2010 that I was accepted into my course, and I began my degree in March of the same year.

University was an amazing experience; I learnt so much more about the advertising and media industry, and the whole time I was there, it just felt like I was doing the right thing and was finally in the right place. I made some amazing friends, and I even got to attend an internship with a top media agency in Sydney. I consider completing university as my biggest accomplishment — I was so sure I’d never do it.

I have been out of university for three months, and in the last week I have been hired as a Buying Account Coordinator for an amazing advertising agency in Sydney. I start in a few weeks’ time, and I am so excited!

My advice for people looking to start work in my industry (or in any industry really): research some companies you’d like to work for and e-mail them directly. In the last fortnight I managed to score 4 separate interviews for different advertising agencies by doing this. I’d previously been looking for work through job search websites, where every job seemed like you needed five or more years of experience to even be considered — that got me nowhere. Show initiative, and you’ll be surprised how fast this gets you interviews!

For those of you still at university, do your best to gain some experience in the field while you are there. Internships are a lot of fun and give you knowledge about your industry that you cannot acquire at university. You’ll learn skills that will be so valuable to your career, and having some internships on your  résumé will set you ahead of other graduates going for the same job as you.

For anyone who is in their twenties and thinking about going to university — do it! Do it even if you have no experience in the field you want to apply for. If you are interested in it, you’ll be motivated to learn all the skills needed to succeed — don’t let the fear of failure hold you back. You can do anything if you really want to.

Thank you for reading my story. You can read more about me at youngmedialove.wordpress.com

← My article for Under30Careers
20something profile: Isaac →