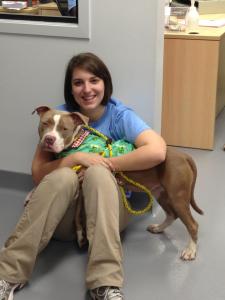 This post was written by Caroline, who works at an animal shelter:

Starting my career in my twenties, I didn’t take the typical path most of my friends chose. They went to college, graduated in four years, and started working a job in their field.

On the other hand, I did just about everything wrong career-wise between 18 and 24. I worked a string of part-time jobs, rarely for more than six months at a time, and I went through a slew of majors at several different colleges. I was a prime example of instability, and I was caught up partying too hard and not taking my future seriously enough.

The only thing I think I did right was take a year-long unpaid internship with a small pro sports team. I gained tons of knowledge during that internship and received opportunities I didn’t dream I’d get to experience. However, I realized pro sports wasn’t the field I wanted to go into.

Still, I did work hard and managed to get a fantastic reference. As much as I ignored it and burned bridges in my late teens and early twenties, I’ve learned that networking is one of the most important tools I can use in my career.

When my 24th birthday hit, I found myself directionless, frustrated, and out of motivation to keep bouncing around. I had absolutely no idea what I wanted to do with my life. I just knew I was tired of living the way I was. I decided to take a break from school and look for full-time work.

Remember that whole partying too hard thing I mentioned? Well, part of that involved me getting into some trouble when I was younger, and I’d done some community service to make up for it. I was lucky enough to be able to choose where I served, and I chose a local animal shelter.

Even though I was doing the nastiest, grossest jobs in the shelter, I remember feeling satisfied at the end of the day. I’d worked so hard that they had actually asked me to interview at the end of my service hours, but I wasn’t interested at the time.

This time around, I took a chance and sent my résumé to the woman who I’d done community service under. I originally applied for a part-time receptionist position to get my foot in the door, but they ended up offering me a full-time animal care position. I firmly believe that my networking and hard work paid off with that opportunity.

When I started, I promised myself I’d work animal care for a year before looking for anything else. This field is vastly different from any other I’ve previously worked in, and I was unsure that I’d end up liking it long-term.

The truth is, I love my field. It’s not glamorous, it’s hard work, and sometimes it’s downright depressing. But most days are uplifting and satisfying. I’ve decided to see what I can do in the nonprofit field.

After interviewing for a few promotions and not receiving them, I finally was offered and accepted an adoption counseling position at our second location. I worked in the kennels for over a year before this happened. I was patient. I hope to eventually move into our fund development department, and I’m planning to go back to school to finish my Bachelor’s degree.

My message to twenty-somethings is this: it’s okay to not have it all figured out. I didn’t. I tried a ton of things, and I’ve found something I’m truly passionate about. It’s okay to keep looking for that passion, and it’s okay to not find it right out of college.

On the flip side, I don’t advise making the mistakes I did. Network, take education seriously, and take the opportunities in front of you, even if they don’t seem like a dream at first. Every experience is a chance to learn where your passion lies.

Posted on May 25, 2013, in 20something profile and tagged advice, employment, networking, nonprofit, twenties, twenty-somethings. Bookmark the permalink. Leave a comment.