Is the cost of college hurting millennials? 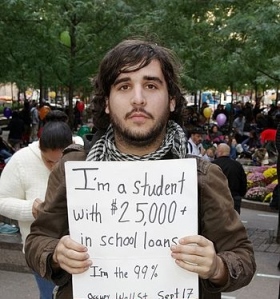 Is a college degree — and the debt that comes with it — hurting millennials? Here’s an article from Main Street that discusses how millennials are struggling to be financially independent because of advances in technology, a globalized labor force, and student loan debt:

What’s Causing Our Millennials to Fail at Becoming Adults (mainstreet.com)

It’s common to hear of millennials’ financial struggles: how they’re burdened with student loans to pay off, how they’re unemployed or underemployed, and how they’re putting off long-term commitments — like buying a house or starting a family — that previous generations were able to do much sooner.

But what makes this piece stand out is the notion that getting a college degree could actually make things worse for millennials financially because of the staggering debt that they have to pay off after they graduate. In support of this argument is a quote from Matthew Saccarro of Salon, who writes:

There’s not a worse decision a young American can make than attending college sans parental money or massive scholarship. You’re paying for nothing that you can’t get elsewhere for less money or free, save for the piece of paper with a con man’s signature on it.

As an example, the article cites Steve, a 26-year-old college graduate with a degree in media arts. He has $140,000 in student loan debt to pay off, which started out as $60,000 but increased due to fees and capitalized interest. Steve expresses frustration that his degree can’t find him work:

My degree hasn’t helped me in the slightest to get any reasonably well-paying job, nor was it needed to get the non-union labor and minimum-wage retail jobs I’ve had to work since graduating.

Last week, I wrote about a young man who wanted to avoid going into debt so badly that he lived in his van while attending graduate school. His unconventional method of escaping student loans worked, as he wound up graduating debt-free. He explains why avoiding debt was so important:

Some people think of their student debt like a car insurance payment — just something they have to pay each month. I think of it like a ball and chain — something that’s keeping you from living a full life.

For those of you recent graduates who took out student loans to pay for college, do you think that it was worth it? Have you been struggling to pay off your debt, and how has it impacted your current living situation? And would you consider going further into debt to enroll in a graduate program?