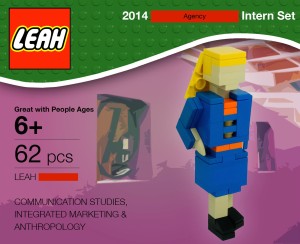 You’ve been to the Lego store. You’ve watched the Lego movie. But have you seen the Lego résumé?

Bowman’s résumé also contained “assembly instructions” that highlighted her skills and explained why she was the #1 choice for the internship.

After struggling to find a job, Bowman was determined to create a résumé that made her stand out. And stand out she did: her unique résumé went viral and got press in Adweek, Mashable, Mic, and even a Danish newspaper. Here’s what Bowman told Mashable:

Looking for a job can be a bit frustrating at times. I’ve applied for dozens of jobs and had a handful of interviews, but sometimes there’s just another candidate that edged you out. I know I’d be a great addition to any team, but I needed a better way to communicate that rather than just sending in a boring résumé.

Bowman is currently an Assistant Account Executive at Energy BBDO. I’m sure her creativity and her ability to think outside the box have made her a major asset to her company. Now if you’ll excuse me, I’ll be making a résumé with Lincoln Logs.